Adam Harper, head chef at The Cavendish Hotel at Baslow, sister hotel to the Devonshire Arms at Bolton Abbey, has reached the finals of the prestigious Roux Scholarship 2019. 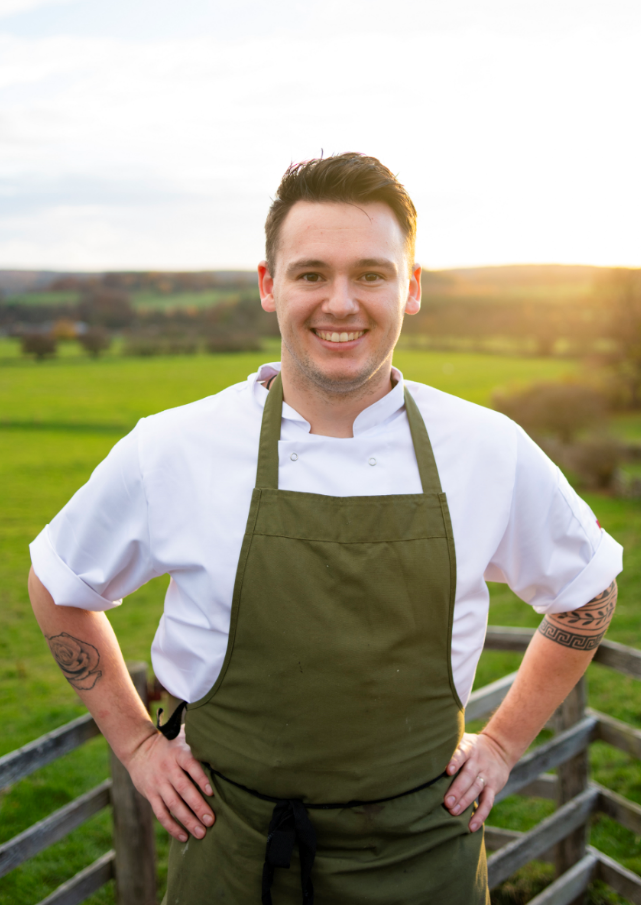 The Roux Scholarship is regarded as the pinnacle accolade and the award all chefs aged under 30 years want to win.  It was created by Albert and Michel Roux (senior) 35 years ago to be a beacon of British talent and inspire more young chefs to raise their game. Each year exciting new talent has been discovered as chefs reach the semi’s and finals with many going on to win Michelin stars.

A massive 800 applicants were eventually reduced to eighteen chefs contesting at the semi finals to be one of the six to go through to the final round.  Two semi finals were held in Birmingham and in London, when the chefs were asked to create their own dish using hogget, meat from a young sheep that Adam describes as “full of flavour”. This was followed by a dessert using ingredients from a mystery box provided on the day of the competition. Adam created an apple and ginger crumble with a golden syrup custard, commenting: “It was important to do something simple but really well to demonstrate my technical skills and to allow the flavours to shine.”

Adam is one of only two finalists to come through from the regions, one other from Jersey and the remaining four finalists are from top London restaurants including two from The Ritz.  Michel Roux Jr. said about the competition: “Amazing standard, every year it just gets better and better.”

Adam Harper joined the Cavendish Hotel, Baslow on the Chatsworth Estate in Derbyshire, in October 2018. A graduate of Derby University he had accrued a wide experience including working in Michelin starred restaurants. Just before joining the Cavendish he was head chef for three years at Rowleys, a contemporary restaurant and bar in Baslow. He is married with a daughter and lives in Chapel le Frith, Derbyshire.

The final will be held over a full day in London on 1st April.