Hi all, how are you doing on this chilly Thursday in Derby? It was frosty this morning and I’m hoping for snow, but I think it’s too cold for even a cheeky little flurry. I was fortunate to pop into Le Bistrot Pierre for a lovely foodie lunch last year (see my original review here). The eatery has undergone a massive and stunning refurbishment and I fell in love with it immediately. It was just so cosy and beautiful, and it felt as if the building was giving me a hug (no I wasn’t drinking or otherwise imbibed, I was just super happy to be in a gorgeous space).

One of the dishes that I loved was the Tartes Flambées featured on Le Bistrot Pierre’s lunch menu. It’s a classic Alsace dish, consisting of a French style flaky flatbread with various toppings to tantalise your taste-buds. The pastry was short, buttery and the wafer thin layers melted in your mouth within seconds. There are four variations and I had the Jambon (thinly sliced French ham, cherry tomatoes). I love what Le Bistrot Pierre have done with this Jambon Tartes Flambées. By taking the classic combo of ham and cheese, they have given it a contemporary European twist, to create something off the Richter scale delicious. 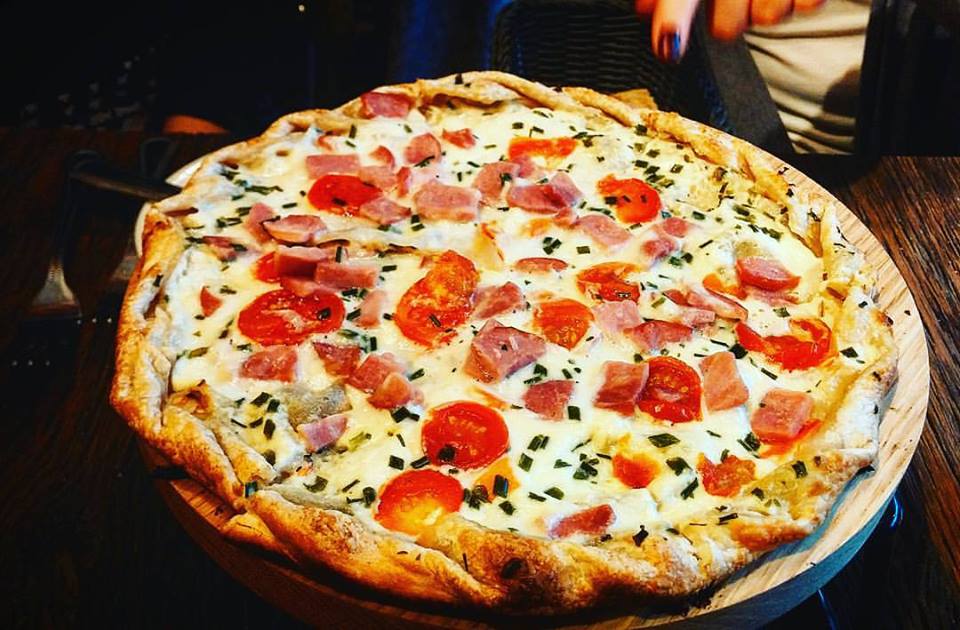 I loved this dish so much, that I had to write about it straight after I’d popped in earlier today. As with all of the #DishDrinkOfTheWeek features, I had to do a little digging as to the origins of this wonderful dish. I discovered that Ajay, director of food development, joins co-owners Rob and John during annual research trips to France to source new recipes ideas and new wines to bring back to the bistrots.

Ajay said: “The Tartes Flambée was introduced on menus last year after we were inspired during a trip to Alsace. The origins of the dish came from an Alsatian tradition hundreds of years ago, where a small piece of dough would be placed in a wooden oven to test its temperature before cooking. Accompanied with onion and cheese, it became very popular and eventually a dish in its own right.

“We initially trialled the dish exclusively in the Torquay bistrot and after receiving such positive feedback from customers we decided to introduce the Tartes Flambée across all 14 bistrots. It’s been a resounding success.

“It’s one the bistrot’s most popular dishes and is available as a lunch item, evening meal appetiser and now is also available on our new children’s menu so younger diners can enjoy the traditional Alsatian dish too. We source the recipe of the dough directly from Alsace and use one that goes back hundreds of years. Rather than using a traditional wooden oven we cook the Tartes Flambée in a stone oven which is heated from the base. The dish is cooked fresh to order and only takes about eight minutes to prepare and cook – c’est delicieux!”

Congratulations Le Bistrot Pierre for being the first #DishDrinkOfTheWeek this year. See you again (very soon).