I know Halloween has passed, but scary movies are always en vogue. I popped along to the Quad in Derby to see Train to Busan, which has already garnered excellent reviews from sources worldwide. I had high hopes for the film, seeing as both revered Empire and Mark Kermode gave it a 4 out of 5 stars. The notoriously difficult Rotten Tomatoes scored it a whopping 96%, which could only mean one thing – Train to Busan was a must-watch on my list.

The viewing was in Box One, which accommodates a few snug double seaters (nice touch Quad). The film starts innocently enough with divorced protagonist Seok-woo (Gong Yoo) in a quandary about whether to let his young daughter Su-an (Kim Su-an) visit her mother on the latter’s birthday.

It is easy to relate to hedge fund manager Gong Yoo’s dilemma. He’s super busy at work, leaving little time to do much else. He doesn’t even make it to his daughter’ recital, which is an obvious source of contention with Su-an.

Guilt facilitates Gong Yoo’s embarrassing climbdown and the father and daughter duo jump on a train headed for Busan. Somehow a zombie manages to board said train, infects a conductor, and before you can say “Zombies are baaaad hombres”, whole swathes of the train become infected. Here is a particularly coiffed zombie. 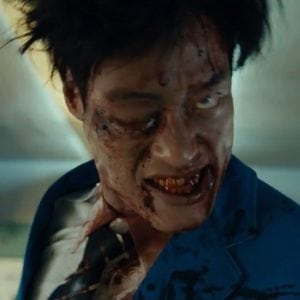 What ensues is a fight for survival. One of my highlights focuses on a fearful individual Yong-suk (Kim Ui-Seong) whose only raison d’être is self-preservation by sacrificing fellow humans. Totally not cool. I haven’t hated an on-screen character for a while, here is this excellent actor in action.

Sang-Hwa (Ma Dong-seok) is sublime as the beefcake with a heart of gold. Gong Yoo shines as the man on a mission to save his daughter whilst burning thousands of calories (he runs everywhere, I’m sure if he wore a pedometer, it would explode).

I didn’t find the film scary. It was highly entertaining though. From the beginning of the movie where Su-an goes walkabout on the train, to the grand finale where a sobbing Su-an tries to make sense of a bizarre world, this film will have you hooked.

Train to Busan is a thought-provoking zombie thriller. Bet you didn’t think I could use ‘thought-provoking’ and ‘zombie’ in one sentence. It is more than just humans fighting zombies. It’s a reflective film that touches nicely on trust, human connections, the passage of time and innocence.

Train to Busan has racked up over 10 million viewers since releasing a few short months ago. What’s so great about it? It’s not just another zombie movie. If that’s what you’re after, you’ll be pleasantly surprised. Granted, subtitled films require a higher degree of concentration than a non-subtitled film. Reading captions whilst simultaneously watching the film can get a little tedious at times, but boy is this movie worth it.

Clocking in at 118 minutes doesn’t make it short, yet it doesn’t feel as if you’ve been sitting down for close to two hours. Miss it, miss out, buckle up and watch, it’s one heck of a ride.

To catch a showing of Train to Busan, do hop on over to the Quad’s website here.