Does the name Julius Pringles mean anything to you? I’ll be honest, apart from the famous surname (Pringles crisps and the eponymous fashion brand), I had no idea Julius was the Pringles’ chap’s first name.

Makeovers usually follow milestone birthdays which is why Mr. P, aka Julius Pringles, the moustachioed mascot for Pringles, is celebrating his first makeover in 20 years. The makeover coincides with the 30-year anniversary of the famous snack brand’s UK launch. Now, I don’t know about you, but I do love a before and after in makeovers. Looking at Mr. P’s timeline, he certainly seems a lot happier now than when he first appeared in 1967. Is it me, or is Julius smiling more? (Yup, I think he is.)

After an eye-catching transformation, the playful Mr. P will now sport a modern emoji-style look including bold new eyebrows and a fancy new red bow tie. Mr.P’s new look has also seen him lose his hair, but at 54 years old, he is still looking as handsome as ever. Here’s a before and after where the difference is really noticeable. I wonder if Mr. P likes his new incarnation. 🙂 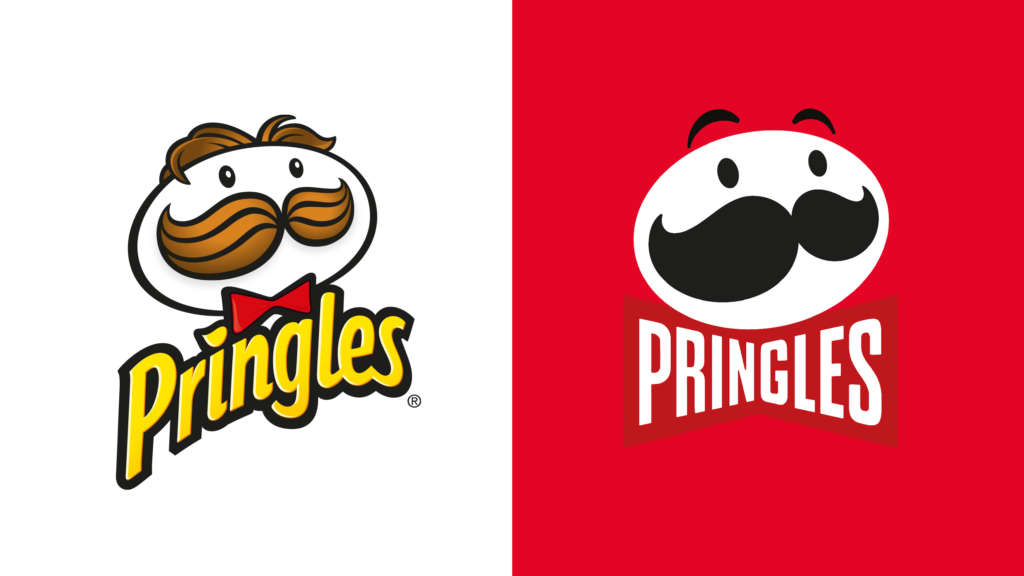 What’s more, it’s not just Mr. P who has had a glow up, the iconic cans have also been given a fresh new look. They will now feature new bright and bold packaging, highlighting Pringles’ range of flavours and of course, their famous stackable shape.

The original Mr. P was designed by Arch Drummond in New York in 1967 and the loveable mascot has since become a global icon synonymous with fun times, and even once found himself guest-starring in an episode of The Simpsons.

Since Pringles launched, Mr. P has had six new looks to keep in tune with the times. Twenty years since his last redesign, the 2021 version of Mr. P is his boldest look yet.

I was sent a Pringles care package to celebrate Julius’s birthday. Here’s the unboxing, I had great fun diving into the box of goodies. Here’s a quick video how the unboxing went. 🙂

After 30 years, Pringles’ popularity is still going strong, with an average of five cans of Pringles flying off shelves each second in the UK. Fans can get their hands on the bold new design now.

There have been more than 102 different Pringles flavours over the years, including the weird and wonderful such as Pigs in Blankets, Mint Choc and Sweet Cinnamon. The most loved flavour of the nation has been and remains Sour Cream and Onion, closely followed by popular classics Original, Texas BBQ, Salt and Vinegar and Prawn Cocktail. I love the Texas BBQ because I adore its earthy notes.

Florence Kayll from Pringles UK said: “After being Pringles’ loyal mascot for many years, Mr. P has had a well-deserved makeover, in what is his boldest look yet. Mr P’s hair may now be gone but he’s looking more youthful than ever with striking new eyebrows and is of course still sporting his famous, stylish moustache as he celebrates his 30th birthday in the UK.

‘’While Mr. P and the can design have both undergone a transformation, Brits can be confident that there are no changes to the amazing flavour and crunch found inside every Pringles can.”

Fans can spot the new design cans and Mr. P’s glow up across stores nationwide now. Pringles are available from a wide range of retailers and also from the Pringles website.

Team Pringles, thank you very much for the awesome care package. 🙂