Booming restaurant and bar scenes in Liverpool, Manchester AND Leeds are growing at rates more than double those of London.

New analysis by Northern Restaurant & Bar, the trade show for the Northern hospitality industry which opens in Manchester next week, and CGA, the hospitality data and insight specialists, has shown that the “M62 corridor” spanning Liverpool, Manchester and Leeds is a hotspot for new restaurants and bars. The number of city centre outlets within those locations has increased by over 20% over the last five years, a percentage double that of London, which had a 10.4% increase during the same period.

The data, from CGA’s Outlet Index, covered the central business districts of every major city which contained over 100 licensed premises.

Thom Hetherington, CEO of Northern Restaurant & Bar said “We’re delighted but not surprised by the data, we have seen the changes first hand – new restaurants and bars are opening almost every day. Liverpool, Manchester and Leeds are building top class food and drink scenes, and that’s great news for diners. Despite this being a challenging period for hospitality businesses, the growth is being largely driven by ambitious regional independents, and we’re proud that NRB can help to inspire and inform them.” 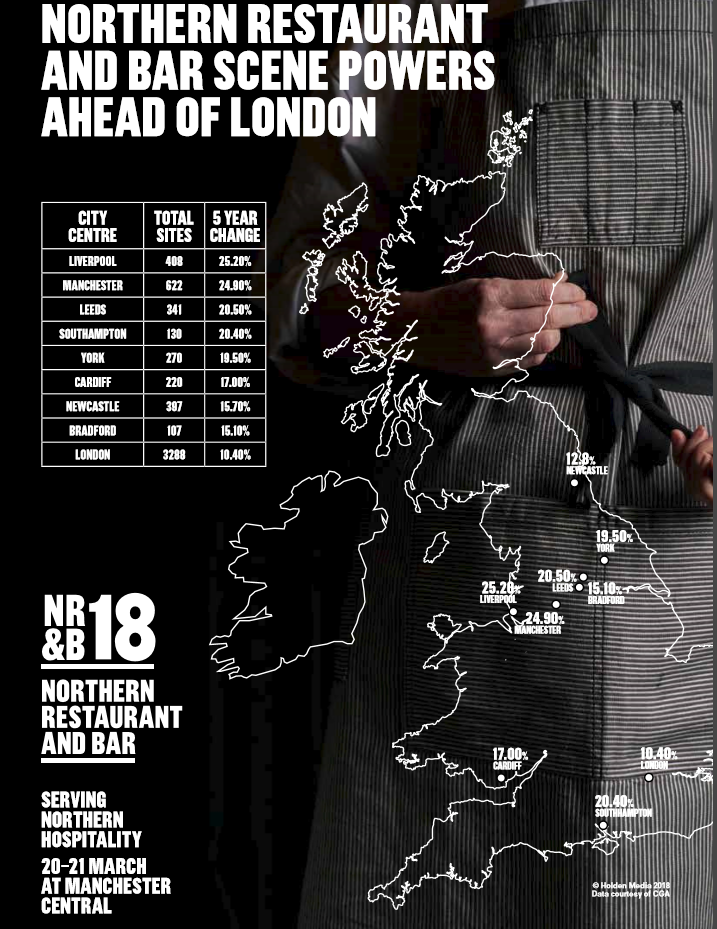 Jamie Campbell, Retail Business Unit Director of CGA, says “Of course London is a much bigger restaurant and bar scene in absolute terms, but percentages don’t lie, the change in the cities in the North is more pronounced and has a proportionally greater impact on diners, whether residents or tourists. Moreover we are working on additional data which shows that growth in the region is indeed being driven by independents, with the featured Northern cities showing an increase in independent outlets at over twice the national rate.”

The continuing boom in the Northern hospitality scene is reflected in the success of NRB, the trade show for the industry in the region, which returns to Manchester Central, for its eighteenth year, next week on 20 & 21 March. Visitor numbers are set to be at an all time high, and stands for exhibiting suppliers sold out well in advance. NRB hosts 275 exhibitors providing every product and service a hospitality business needs, delivers 65 exciting live food & drink demos, and brings the entire Northern hospitality industry together for two days of networking, discovery and inspiration.

Free trade only tickets are available now at northernrestaurantandbar.co.uk