With the exponential rise of veganism in the UK – take last night’s airing of the first ever vegan challenge on the Great British Bake Off – it is no surprise that companies are catering for discerning diners who want to embrace the vegan lifestyle.

At the time of writing, there are over 3.5 million Brits, or 7% of the population who identify as being vegan. I’ll be honest – I flirted with veganism a few years’ ago. I am now eating more vegetables than ever. And although I can’t be a full-on vegan, I still appreciate good vegan food and will seek it out over non-vegan alternatives.

I was contacted by Nush to review their cheese, and after brushing up on their product knowledge (I spend at least half an hour doing preliminary research and getting to know a product or company before I commit to a review), I agreed to write about it.

I have tasted vegan cheese exactly twice in my life. The first time was at a vegan fair a few years’ ago. I’d like to tell you how that was, but it – the vegan cheese tasting that is – was a nondescript, non-event which I’ve forgotten about. But I’m all about making new memories, so here I came to be, armed with Nush’s range of vegan cheese spreads.

A little bit about Nush before we dive into the review. The company wanted to create ethical, dairy-free products whilst simultaneously destroying the myth that dairy-free has to be bland and boring. That is a task of Herculean proportions. Could Nush deliver?

There are four key ranges; almond, cashew, Nush tubes (fruit yoghurt) and cheese spread, the latter being what I tried.

I like dippy things. Ever since I fell in love with those ChocDip tubs as a precocious 10 year old, I have loved the act of dunking, dipping and swiping. It makes eating so much fun. That’s not to say that I love dipping all the time – I need to be in a casual mood to eat casually. 99% of the time, I prefer a sit-down three course meal. I have mixed feelings about street-food, but more on that in a standalone post.

Back to the review, and two tubs of Nush Cheese Natural and Nush Cheese Chive arrived. These cheese spreads are made by churning bespoke creamy almond milk with live vegan cheese cultures. I’m big on provenance, in that I love knowing where a food product has originated from. When I’m out reviewing, or even grabbing a spot of lunch, I always find myself trying to discover the origins of the component ingredients which make up that dish. The creamy almond milk is made in a UK factory, and it is flavoured with British sea salt. That’s good to know. I love salt (and butter) with the intensity of a thousand suns and automatically have trust issues with anyone who doesn’t like salt.

The first thing that struck me was the packaging. It looked like a “normal”, sorry I mean “regular” cheese spread. I know I need to educate myself on vegan offerings, and this is something that I am in the middle of doing. Call it my “vegan education journey”, which I’ll update you on shortly.

I cracked both tubs open and tasted a teaspoon of each, with a swig of water in between to reset the palate. The natural vegan cream cheese tub was, dare I say it… like a regular, non-vegan cream cheese. Thick and creamy with that magical lactic tang (magic because it doesn’t contain dairy milk), this vegan cream cheese was delicious to eat by the spoonful.

The chive vegan cream cheese is made of the same base, i.e. almond milk and live vegan cheese cultures. Except in this instance, the addition of chives is the differentiating factor. In addition to my love for salt and butter – salted butter is pure heaven – I also love garlic. Seriously, vampires would hate me, but I cannot get over its scent and texture. Whole, slow roasted bulbs are the best as they acquire an almost fudgy, slightly caramelised quality when cooked in the oven. Chives belong to the same garlic family, along with spring onions, shallots and leeks, and being in love with chives meant me loving this chive cream cheese off the bat. 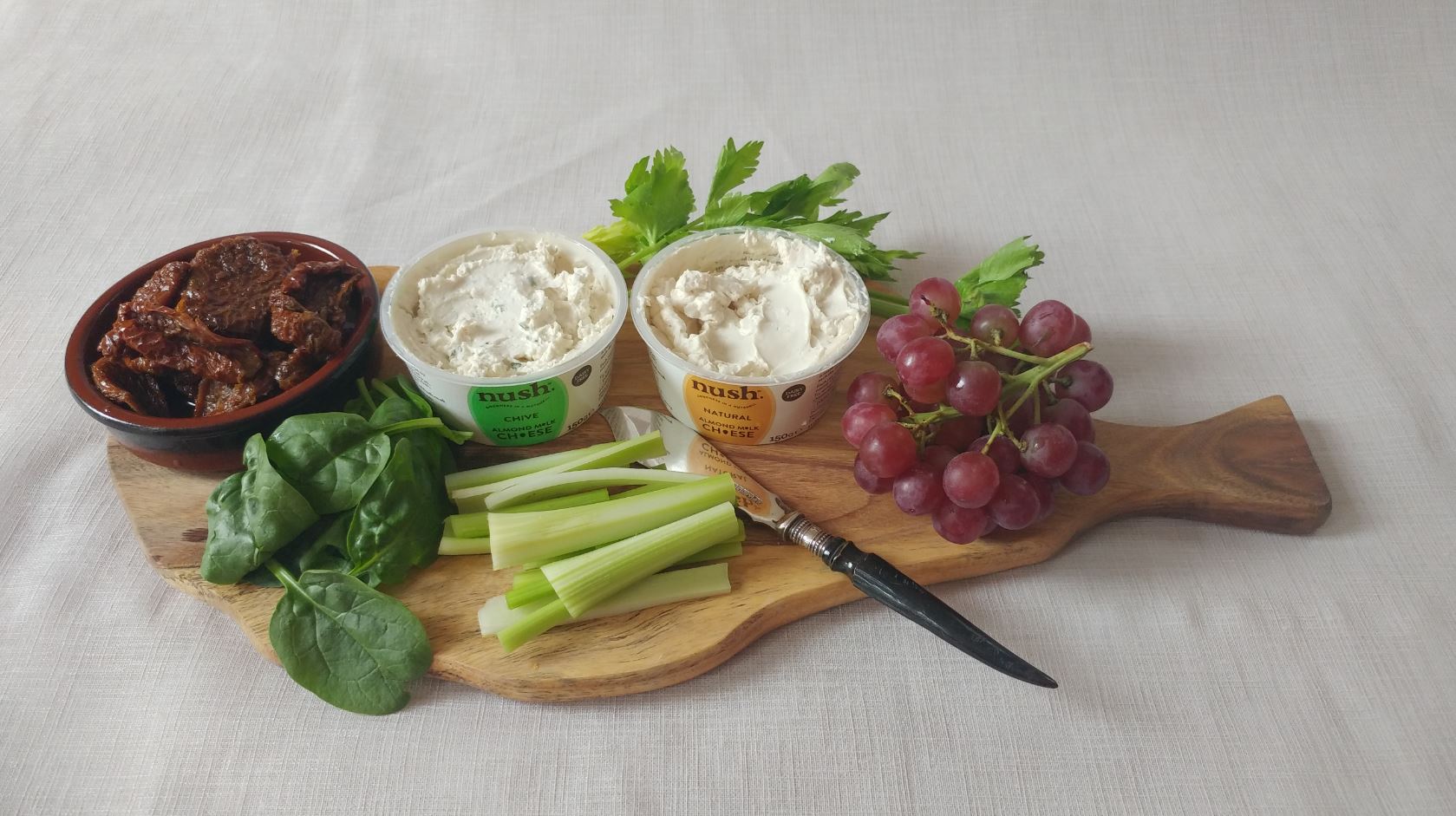 The chive vegan cream cheese had the same texture as the natural vegan cream cheese, it being luxuriously creamy on the palate. I loved the slightly piquant tang of the chives and the pop of emerald green. I used Nush vegan cream cheeses as part of a cheeseboard. I especially enjoyed swiping celery stick crudités through the creamy goodness. There are numerous recipes on Nush’s website, which you may want to check out. In addition to these, I’d use the Nush vegan cream cheese as cheese sauce base. Swirl through 50g of the vegan cream cheese in a pan of freshly boiled, al dente pasta, season with cracked black pepper and sea salt, serve alongside a big mixed leaf salad, and there you go, you have a quick mid-week meal. 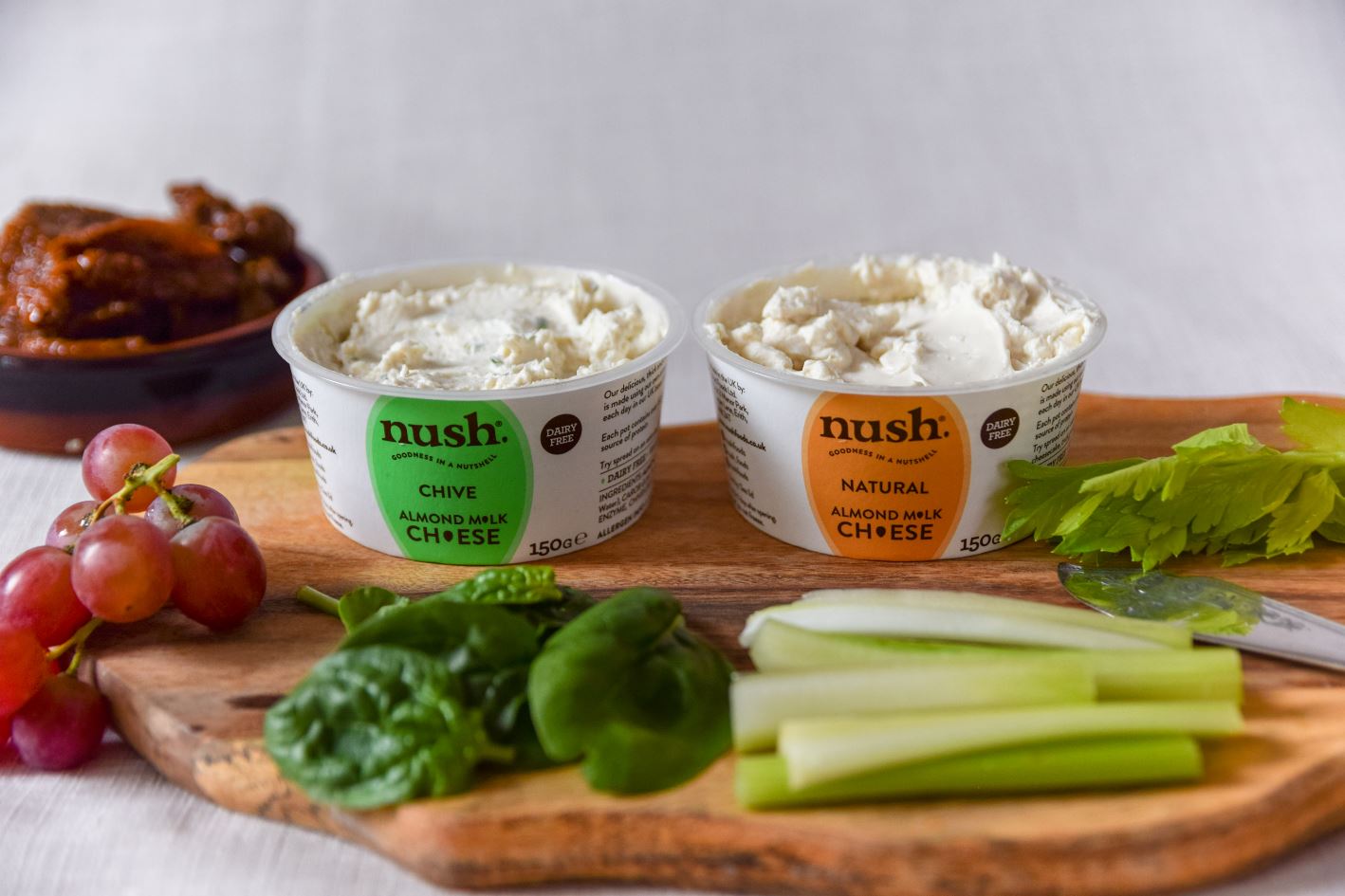 I loved tasting and reviewing Nush vegan cream cheese. To find out more about Nush hop on over to their website now.