With Christmas exactly one month away (woohoo!), you’re probably on the lookout for a Christmas present with a difference. No one wants the same present as last year (that cashmere jumper was SOOOOO last season).

If you fancy yourself as a cool creative bod and want to get someone a Christmas gift with a difference, why not try your hand at whisky or rum blending? Yup, you can mix, blend and get your creative juices flowing by mixing up a storm on the spirit front. 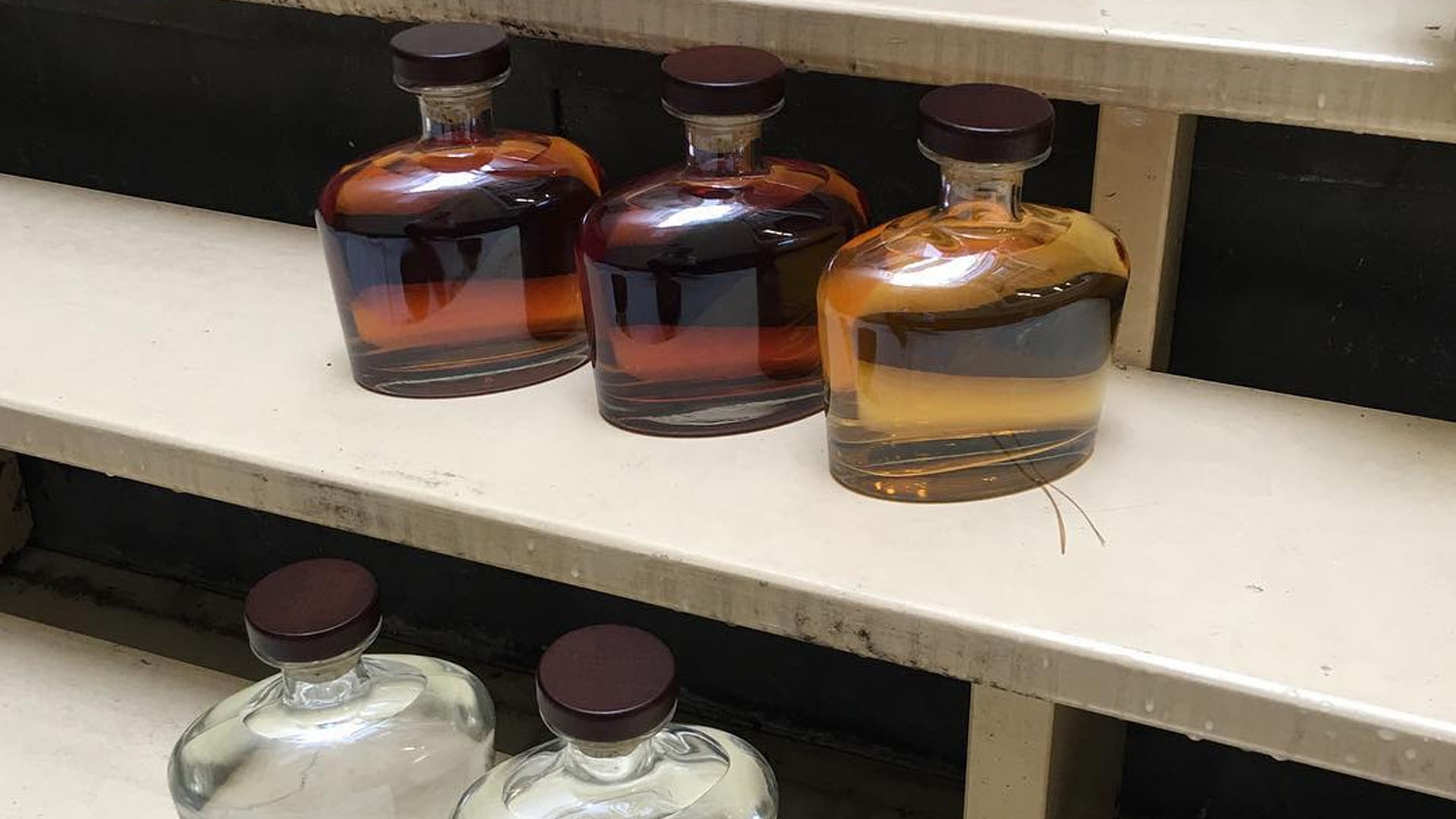 You know those inebriated conversations with BFFs at some ungodly hour whilst propping up the bar, where you make plans to rule the world, and somehow it all gets forgotten come morning? Well, the story behind Whisky Blender is like that, but with a twist.

After a rip-roaring night out, two Scottish friends came up with the ingenious idea of creating a virtual blending lab where people can custom-make their very own bottle of Scotch online. In 2011 the award-winning Whisky Blender (whiskyblender.com) was born. Four years later the entrepreneurial duo partnered up with one of the oldest rum blending companies in the world to launch Rum Blender (rumblender.nl). Now, marking their fifth anniversary, they celebrate with a rebrand, a redesign and a relaunch of both offerings… just in time for Christmas.

Creating your own bespoke blend couldn’t be simpler. Each site offers seven specially hand-picked options to choose from, complete with their own tantalising tasting notes.

At the tap of a button you can add all the options you want to your virtual bottle – whether you’re on desktop or a mobile – and as you experiment, the bottle fills. A neat trick, is that it even cleverly changes hue to match the contents.

Once you’ve finished your masterpiece, you get to name it; each luxury decanter comes with its own handwritten label, including the date it was bottled on. With gift vouchers available, these striking bottles make a one-of-a-kind gift that’s special enough to celebrate any occasion. And with over 218 million possible blend combinations, no one else in the world will own a bottle quite as unique as yours. 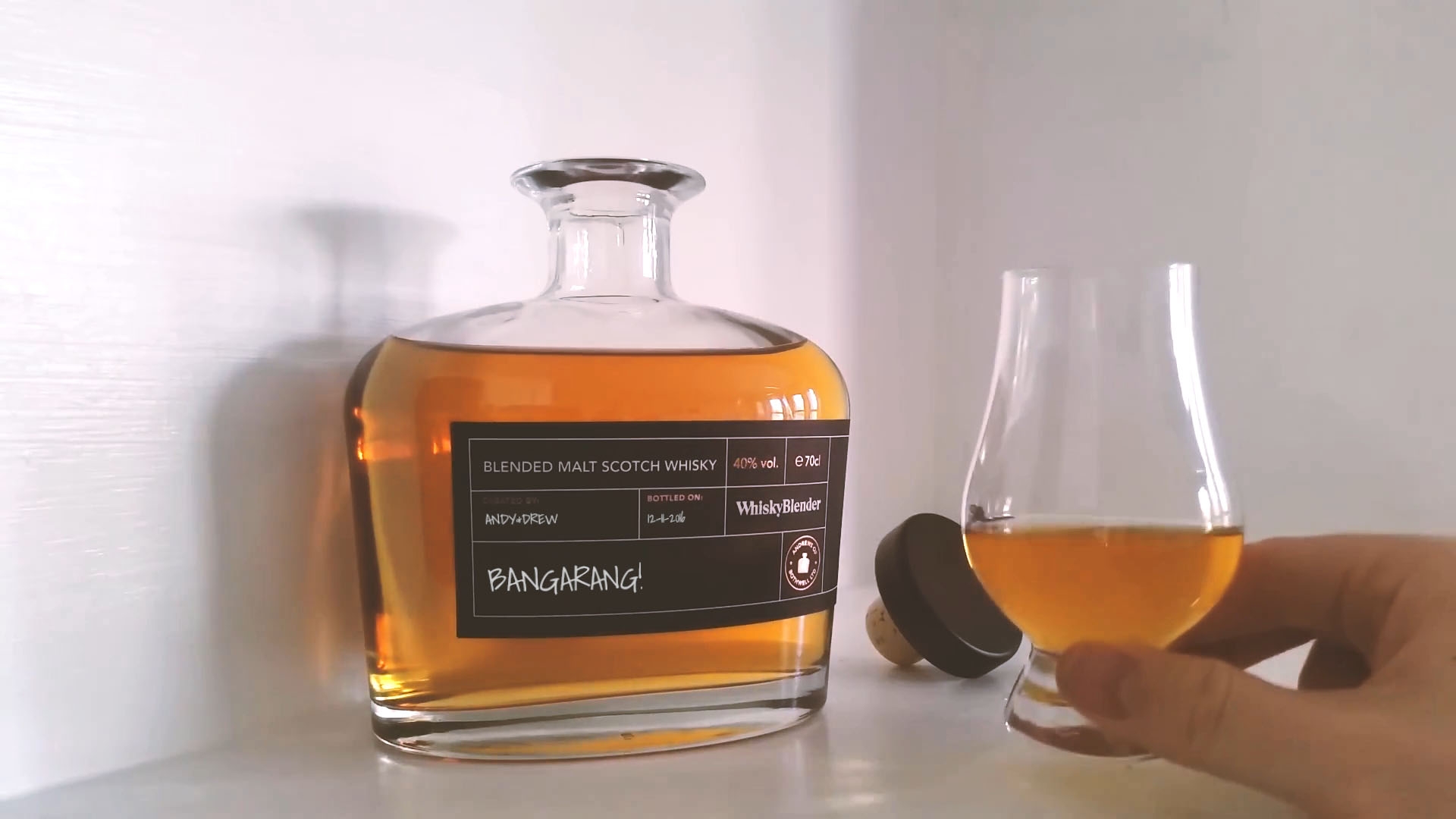 I heard about Whisky Blender on Facebook, and I couldn’t help but be intrigued by how it came to be. I caught up with Andrew Davidson and Andrew Nicolson, the co-founders and whisky-fans of Whisky Blender and Rum Blender. Here is what they had to say about Japanese whisky, cooking with whisky and what’s the best part of working in the premium spirit industry.

To create your own whisky or rum sounds positively magical. What is the story behind Whisky Blender and Rum Blender? How did it come to be?

Basically we just wanted to do something. Anything. Being huge whisky fans for years, now we have attended festivals, watched reviews, taken classes, visited distilleries and enjoyed their tours… but we weren’t part of it. Or more accurately, no part of it was ours.

Around six years ago, after getting fairly well lubricated at the Whisky An’ A’ That Festival in Ayr then grabbing some scran, touring the local pubs and napping on the train back to Glasgow only to hit another watering hole, we started talking. Drunkenly brainstorming (as we often do) what kinds of things we felt would be cool to do; more importantly, that two plebs from the Glasgow area could do. Then, EUREKA!

We built and launched the site (with help from a great developer friend) and have been gently evolving it ever since. A couple of years ago we were approached by a director of a huge rum company in Amsterdam who loved the site and wanted to work with us to make a version for rum. So we did.

How many different whiskies and rums have been created by your lab since Whisky Blender and Rum Blender were born? Do you keep track?

Every blend is recorded in a database and can be accessed at any time by entering a unique bottle code. There’s about 54,000 blends between both sites now, but that’s out of a possible 437,237,866 different combinations.

What is your favourite whisky? Single malt or blended? Favourite rum?

I don’t have a favourite. Though I am definitely leaning more towards rum these days (something I really didn’t appreciate before tasting the rums we offer on the site – they’re truly remarkable). 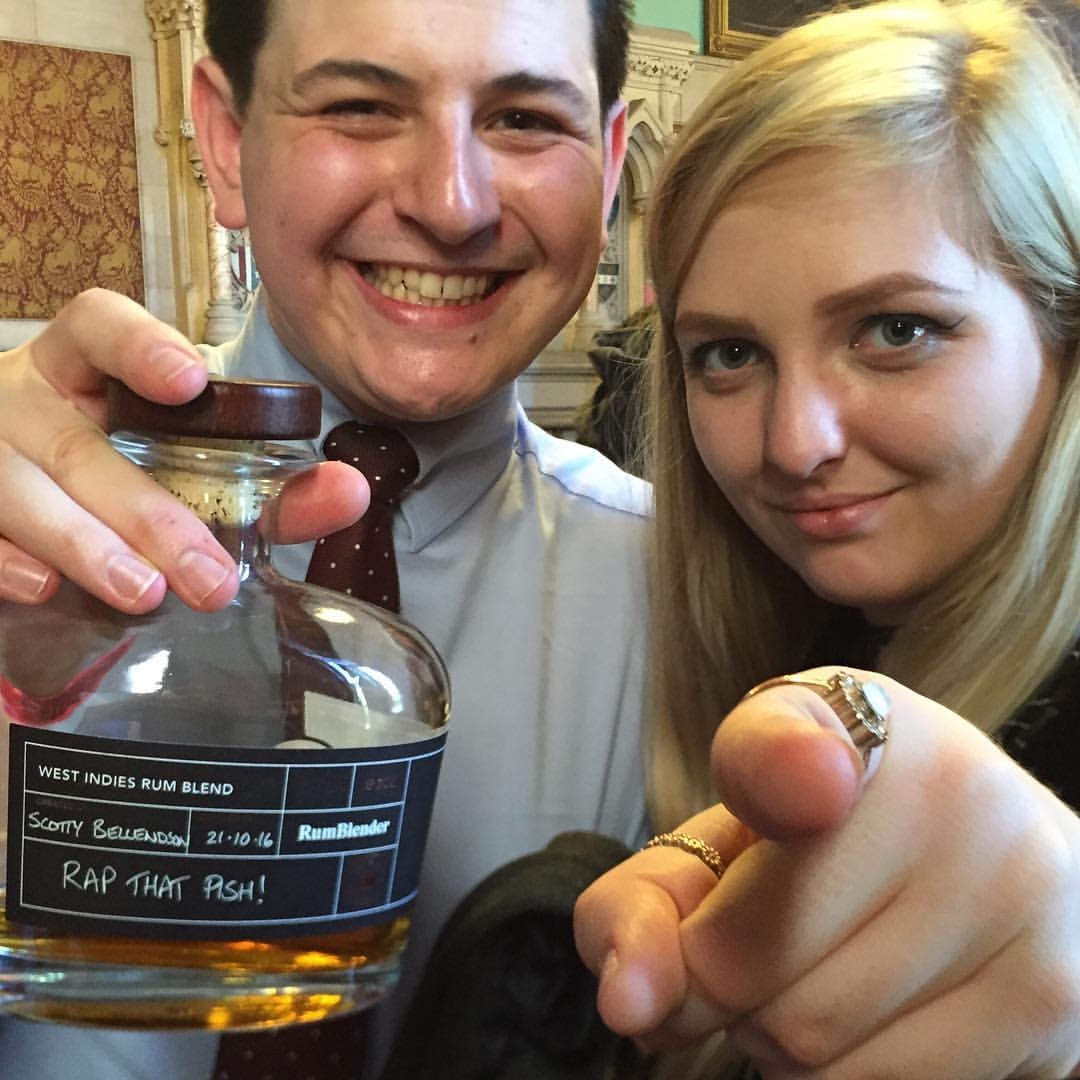 Japan seems to produce a lot of the heavy hitting, award winning whiskies. What are they doing right?

I couldn’t say for sure – but I guess one difference between Scotch and Japanese whiskies might be the need for consistency. There’s a lot of swapping which goes on between Scotch producers and these cask trades rely on the spirit tasting the same way (or as close as possible) each time it’s produced. Whereas I feel that in Japan, there’s a lot more “tweaking” that goes on with every batch, adjusting things here and there each time in a bid to improve.

How about whisky in food?

I’m very much a “drink the stuff” kind of guy. Though, I’m not against it and love a whisky sauce with my haggis and dessert is always better when it features rum in some way.

I’m a newbie and had to Google the difference between ‘whiskey’ and ‘whisky’. Do you get total novices creating blends from scratch? How does it fare?

Just remember that the only difference between whiskey and whisky is that ‘e’. And I feel that is the same with whisky in general.

People attach a lot of confusion to whisky and I feel it creates a barrier to entry for a lot of folk. It’s a drink. A complex drink full of character… but that’s it. You don’t need an education to enjoy it and there are no rules. Most people who use Whisky Blender, I believe, are novices. And that’s one of the things I love most about it.

What is the best thing about what you do at Whisky Blender and Rum Blender?

We feel that we’re helping people experience whisky and rum in a new way. An exciting, personal, adventurous way. Something that’ll inspire more people to order a whisky in a bar. To explore the drinks in a way that’s focussed less on what surrounds it and more about what’s in it. The flavours.

With Christmas around the corner, I’m guessing you’ll see a spike in sales as people look into buying gifts. What’s the best thing about opening up a Whisky Blender whisky or Rum Blender rum on Christmas Day?

The coolest thing is the total surprise. Our bottles aren’t tall and thin, so there’s little chance of guessing it until it’s open. Also, because our customers can name it whatever they like, usually the bottles have a meaningful, personal or incredibly funny name. Then when they realise that it’s no standard bottle of whisky and that it had been specially blended by a loved one just for them… it’s just a belter of a gift really.

To find out more about Whisky Blender or Rum Blender, hop onto respective websites here:

If you get to create your own delicious concoctions, please do Tweet me, I’d love to know how you get on. Have a great weekend!