Have you ever experienced something regrettable, but for some reason (convenience? Self-doubt – it wasn’t that bad, was it?), return and do the exact same thing… again?

That has been the story of me dining at Red Chilli, Littleover, Derby. I’m a hopeful soul, meaning I tell myself that this time, it has to be better than the last. After all, how bad can it get? And the restaurant is down the road, so it’s easy to get to. And I was tired, so I thought, why not give it another whirl?

A little background – I have eaten at Red Chilli Derby around 10 times. Each time has been abysmal. Now, we go in and wonder how bad it can be. Which isn’t really the ideal feeling you’d want to inspire in diners.

I have never reviewed Red Chilli Derby because I always feel that should I return, it may get a little awkward. But then I thought of the quote (see featured image): You can never make the same mistake twice, because the second time it’s not a mistake, but a choice. Yes, I have to say that it’s been a conscious choice on my part to visit Red Chilli Derby. As I now see that it cannot get any better (acceptance is the first stage, hallelujah!), here is my review.

The décor of Red Chilli is interesting. Neon lights in odd lines on walls, a cave-like atmosphere where Stig of the Dump would be at home, toilets that could do with a check that happen to be sans hand-towels / napkins / hand dryer (latter which also looked older than me)… I could go on.

It was a Sunday evening and we chose the buffet option. The restaurant is nearly always empty, so at least getting a table wasn’t difficult.

We sat down at our table, ordered our drinks, and said we’d like the buffet option. We thought that by the time we return from the toilets, our drinks would have arrived. We returned from the toilets. Our waiter was having a vociferous, seemingly enjoyable conversation with his colleague. We’d waited around 7 minutes, before I caught the attention of another waiter, to ask him where our drinks were please.

Now, under any other normal situation, i.e. if a restaurant is busy and drinks are served a little late, that is fine. There were 3 tables in the whole restaurant – ours included – and two of those were buffet orders – and still a simple thing like drinks couldn’t be served efficiently.

As I said, I was tired. And cold. And by now, thirsty. Yes, it was buffet, meaning we could help ourselves with food. But one of my pet peeves, is to be forced to eat on a thirsty mouth, which is what I did as I waited for my non-complicated drink to arrive (diet coke sans ice).

I must check the specifics, but I‘m sure the buffet boasted 25 items for £9.95 per person. Tenner for all you can eat – AND with 25 items to choose from, sounds like a great deal, right?

Crossing over to the food section, I hungrily perused the various containers at the buffet station. Some were empty. One had a lone piece of chicken lying at the bottom. There were around 12 food offerings – less than half of what was advertised.

The perfunctory salad table seemed basic. Poppadoms were decent. Onion bhajis were dense. They were raw in middle. They were greasier than Peter Andre in that video. And these onion bhajis were as heavy as a bomb – I think Trump should use them as ammunition against Rocket Man Kim Jong-un should he decide to take his sabre rattling with North Korea to the next level. And yes, that is a dirty salt pot there. 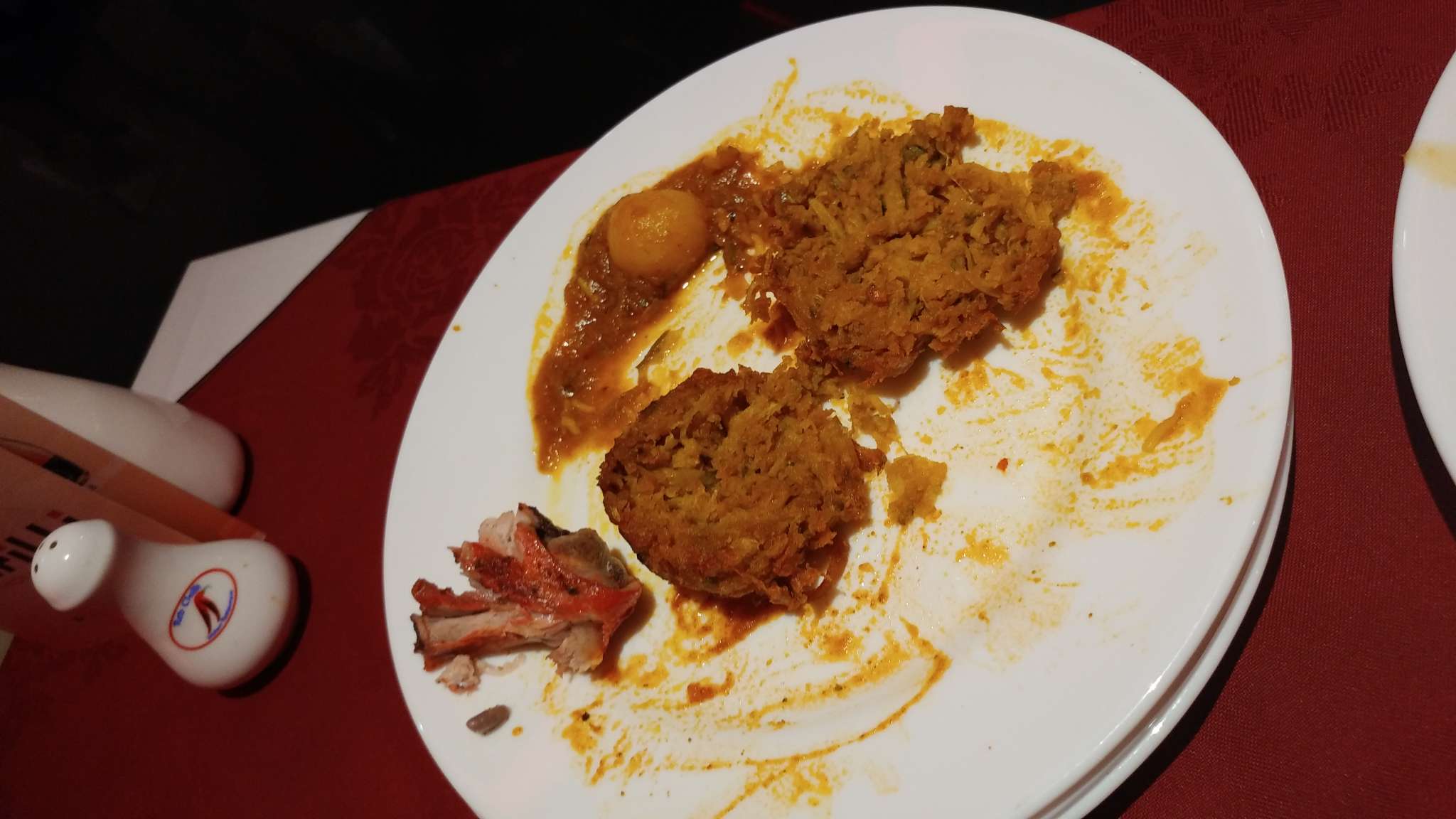 When I asked an errant waiter what starters were available (my diplomatic speak to make him aware that a number of containers were empty), he did what I thought wasn’t possible. He didn’t even flinch at the embarrassing offerings. The dish with the positively dehydrated chicken piece – which looked as if it had run the Salford 10K marathon – he just pointed at it and said: “That’s chicken.”

And that’s when I knew he didn’t care. And that is what the problem is. The people at Red Chilli simply don’t care.

When dining partner asked later on if there was going to be any refills, he was told: “We have to cook the dishes you see.”

Newsflash – you’re a restaurant. That’s the crux of what you should be doing.

Naan did arrive around 10 minutes later, and it was fresh and decent. But asking for food makes you feel as if you’re asking for a favour, and that’s not what a diner’s experience should be.

We weren’t in there for long and went to pay at the bar. We paid, and when the waiter handed us our change, he seemed a little on edge. I dismissed it as mild paranoia – after all, what could a waiter be cagey about? Upon getting home, we realised that he’d given us three £1 coins – the soon-to-be-dated variety. Which is probably why he was being a little tense.

Just to point out, that the waiter didn’t do anything illegal. In my opinion, it is simply bad customer service, as the round pound coins cease to become legal tender on midnight tonight (15th October 2017). We only realised when we got indoors that we were in possession of the round pound coins, which I think some banks may take, but this is a headache we could have done without (I mean, who even visits banks these days?).

Red Chilli should be named the eighth wonder of the world, because it really is a genuine wonder that it is still open after serving mediocre food with abysmal customer service to boot.