You cannot enjoy Christmas without thinking of Charles Dickens’ A Christmas Carol. The novel was first published in 1843, and 176 years’ later, continues to stand the test of time through various adaptations into film and theatre today.

Derby Theatre’s production has been adapted for the stage by Neil Duffield, with Oliver O’Shea as director, Jack Quarton as composer and musical director, and cast headed up by Gareth Williams as Ebeneezer Scrooge. 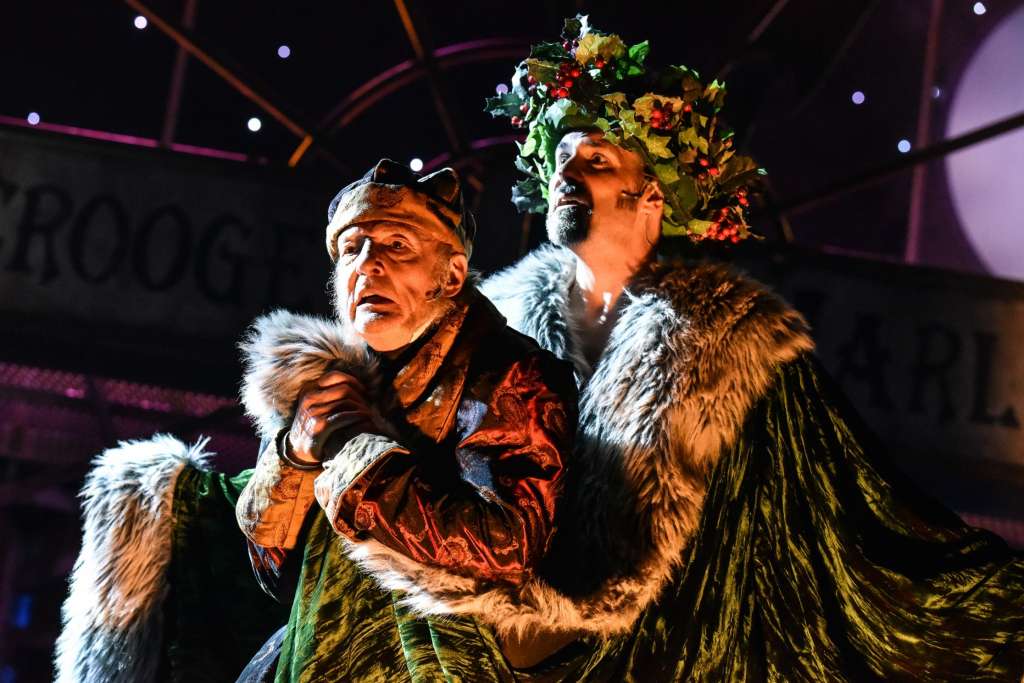 I adore Dickens. A Christmas Carol, Nicholas Nickleby and Great Expectations are a few of the books I enjoyed in my formative years, which is why I was really looking forward to Derby Theatre’s interpretation of Dickens’ classic.

If you’re unfamiliar with the tale of Scrooge, here is a whistle-stop introduction. Curmudgeonly miser Ebeneezer Scrooge is rich. Having built up a fortune over the years, and pretty much forgoing all human contact, he lacks empathy and values money over relationships.

We don’t really know his age, apart from a guesstimate placing him around 60 years’ old. Scrooge has no friends and just one nephew, who visits him from time to time. On Christmas Eve, our mate Ebeneezer is visited by four ghosts including his old business partner, who warns him to see the error of his ways, otherwise face eternity in an unholy hell burdened with heavy chains. 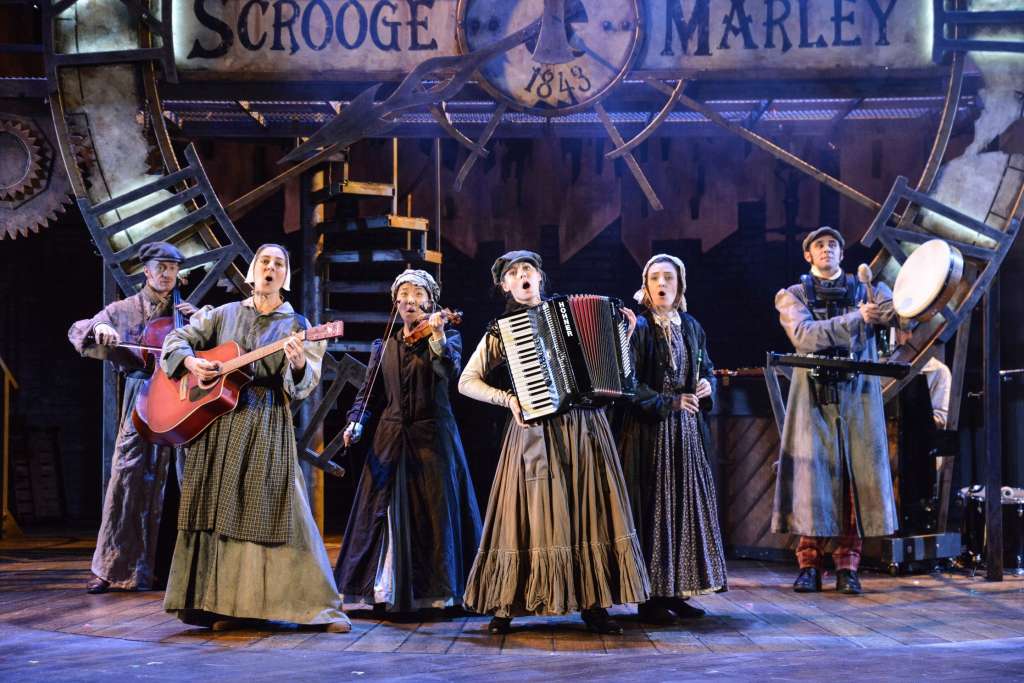 If you thought your Christmas Eve was eventful, you’d be surprised what fate has in store for Ebeneezer. What unfolds are events over the night of Christmas Eve, where Scrooge is visited by the Ghosts of Christmas Past, Christmas Present and Christmas Future.

The production is well plotted with excellent props. The giant clock that takes centre-stage is grand and almost like a standalone character called Time, who is forgiving yet scholarly as she teaches a lesson to the mean-spirited Scrooge. 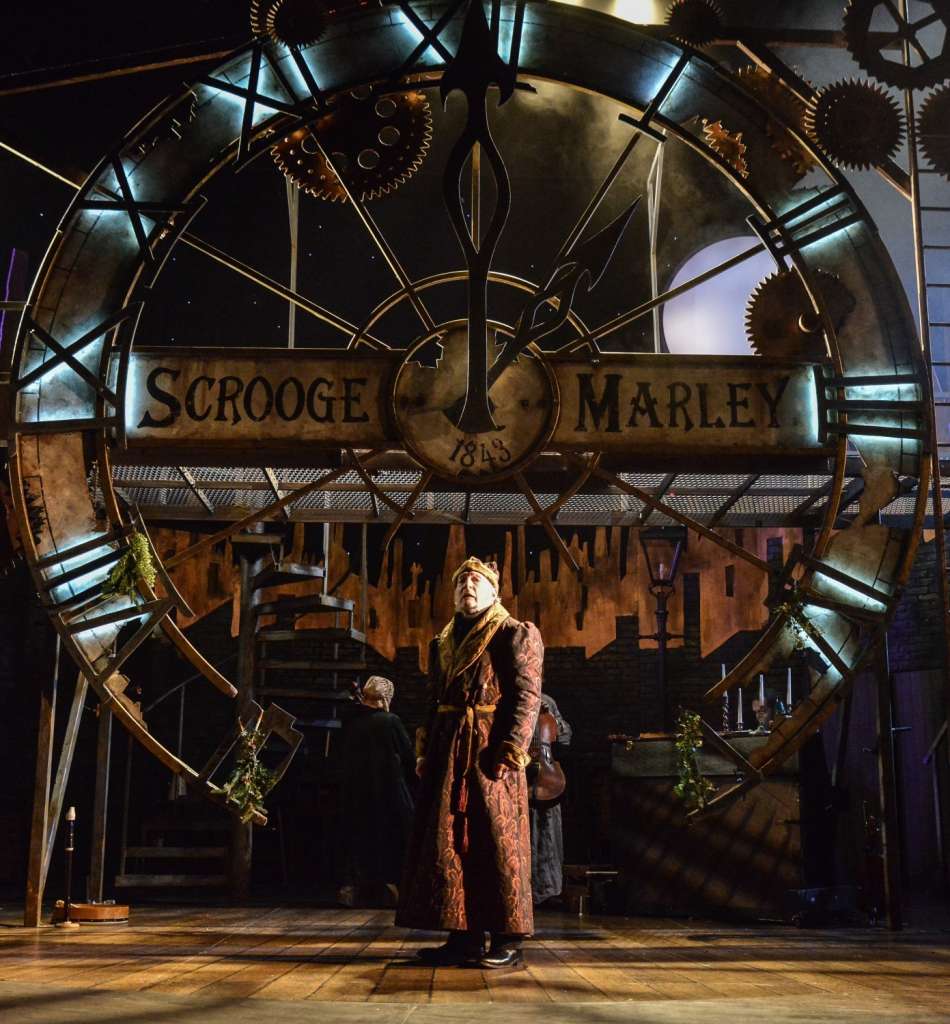 Derby Theatre’s production is entertaining and thought-provoking in equal measure. There are striking parallels from Dickens’ era and today, which make uncomfortable viewing, but which needs to be addressed.

The scene where a visibly shaken Scrooge meets faceless characters Hunger and Poverty is breath-taking. The two wretched children (their outstretched hands is all we see of them) representing the poor in the world, makes one think of the social injustice in present day where austerity and social care cuts have led to increased poverty over the past decade.

Seeing Scrooge’s miserly skinflint transform into a warm-hearted human is nothing short of a Christmas miracle. It is made all the more believable by the brilliant acting of Gareth Williams’ whose portrayal of Scrooge will leave you wanting to leap out of your seat, vault over the audience’s heads onto the stage and turn the giant clock back, just so you can enjoy the production all over again. (I am seriously checking my diary to see if I can go see it again, I loved it that much.)

I laughed, I had something in my eye (fine, I cried), I jumped (when a ghost appeared in Marley’s door) and above all, I had one of the best evenings of the year. 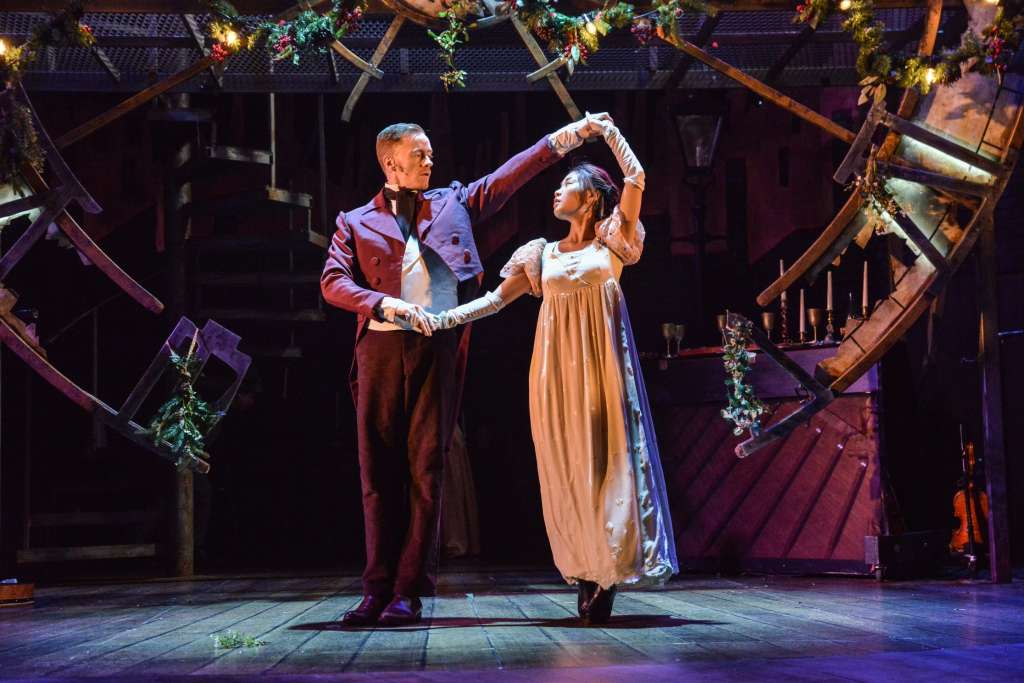 Duffield thankfully remains faithful to the original story. From the opening scene of the giant clock, to the end where Scrooge’s reformed character is aglow with kindness, Derby Theatre’s A Christmas Carol is a joy to watch.

Derby Theatre’s production of A Christmas Carol is running for one more week until Saturday 4 January 2020. To book tickets, please visit this website now.