What is your idea of heaven? Writing, reading, eating cake and sipping coffee is probably my idea of a perfect day. That includes chillaxing with the boyf, but we’ll stop right there (efficiently circumventing vomtastic behaviour).

I was lucky to review muffins by Filthy Rich Vegan. As the name suggests, they’re muffins that just happen to be vegan.

I have flirted with going vegan for a while now. Although I think it takes great discipline to lead a vegan lifestyle, I think it is getting easier. Someday I might become a fully fledged vegan, in the meantime, I’m incorporating vegan elements and leading a flexitarian diet (this means more vegetables and less animal products).

Vegan food can sometimes get a bad rep. There seems to be a stigma attached to it, being laced with connotations of being the hippie food of tree-huggers anonymous.

Did you know that the number of vegans has risen by over 360 percent over the past decade?* McDonalds too have jumped onto the lean green vegan bandwagon, as they unveiled a trial run of the McVegan in Finland two days ago.

It’s great to see this vegan revolution, because it means greater diversity and more options for vegans who otherwise have been restricted thus far.

I have tried to expand my vegan horizon with varying degrees of success, and I was  definitely intrigued by Filthy Rich Vegan and the concept of vegan muffins.

First of all, isn’t Filthy Rich Vegan a great name? The first thing that hit me about Filthy Rich Vegan was the marketing. Chrissie is the mastermind behind the slick, punchy and eye-catching brand. It is sparkly. It is beautiful. And it is unapologetically indulgent.

Filthy Rich Vegan freshly bake vegan muffins to order. Their recipes are 100% dairy- and egg-free. Based in Nottingham, they deliver vegan muffins within Nottingham and Derby. I was lucky to review a box of six muffins consisting of three flavours.

As mentioned earlier, cake and coffee go hand in hand (pardon the pun). I liken this cake and coffee partnership as the perfect marriage, much like Amal and George Clooney.

To make things even more interesting, I brewed three lots of coffee and conducted a coffee and cake tasting, to see which pairing was the biggest hit with my taste-buds. All muffin sponges reviewed were made of vanilla. All coffee was brewed using Aeropress. The three types of coffee I brewed were: 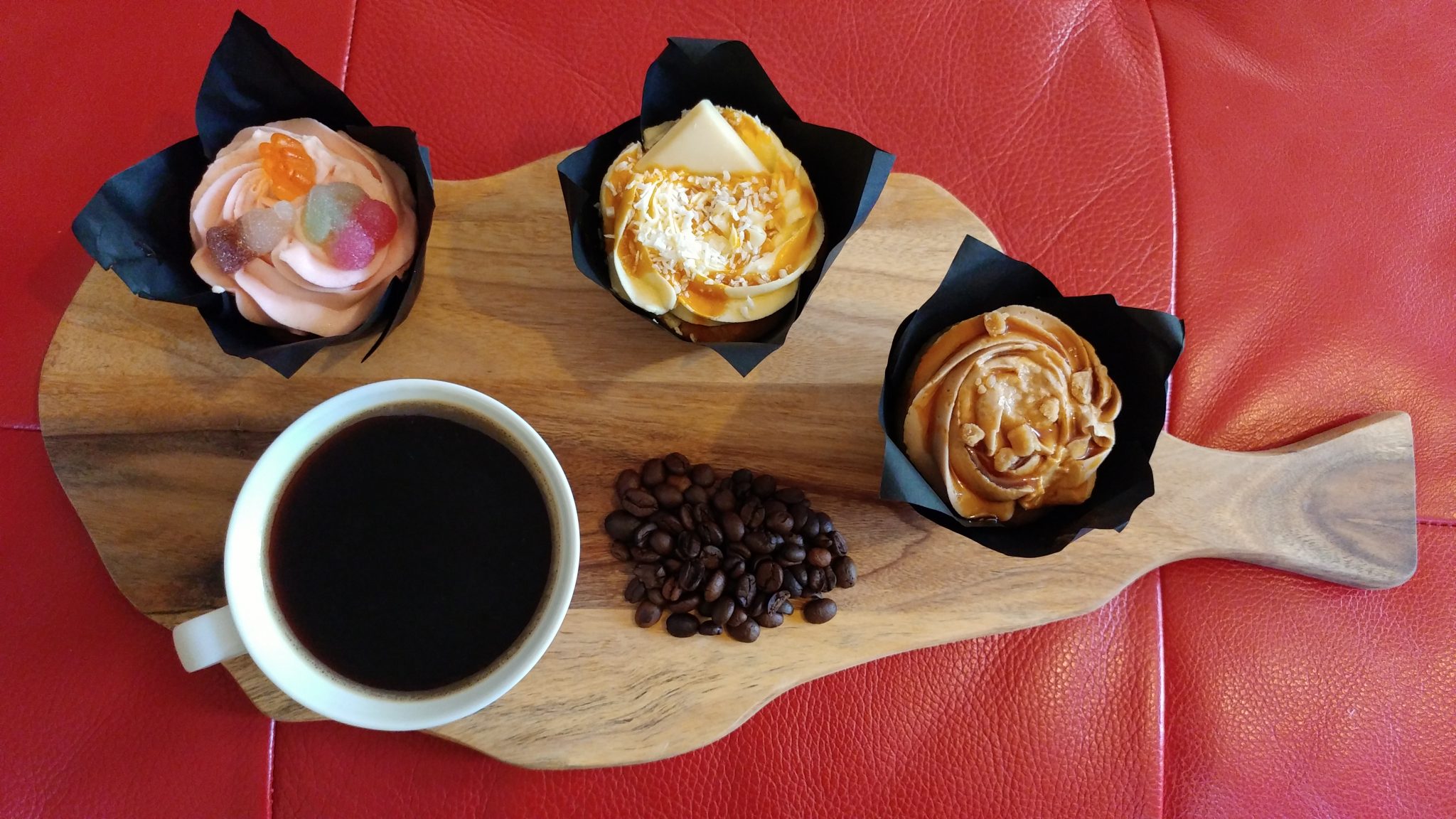 I chose three flavours from the the Filthy Rich range; first up, Salty Fudge Sundae. 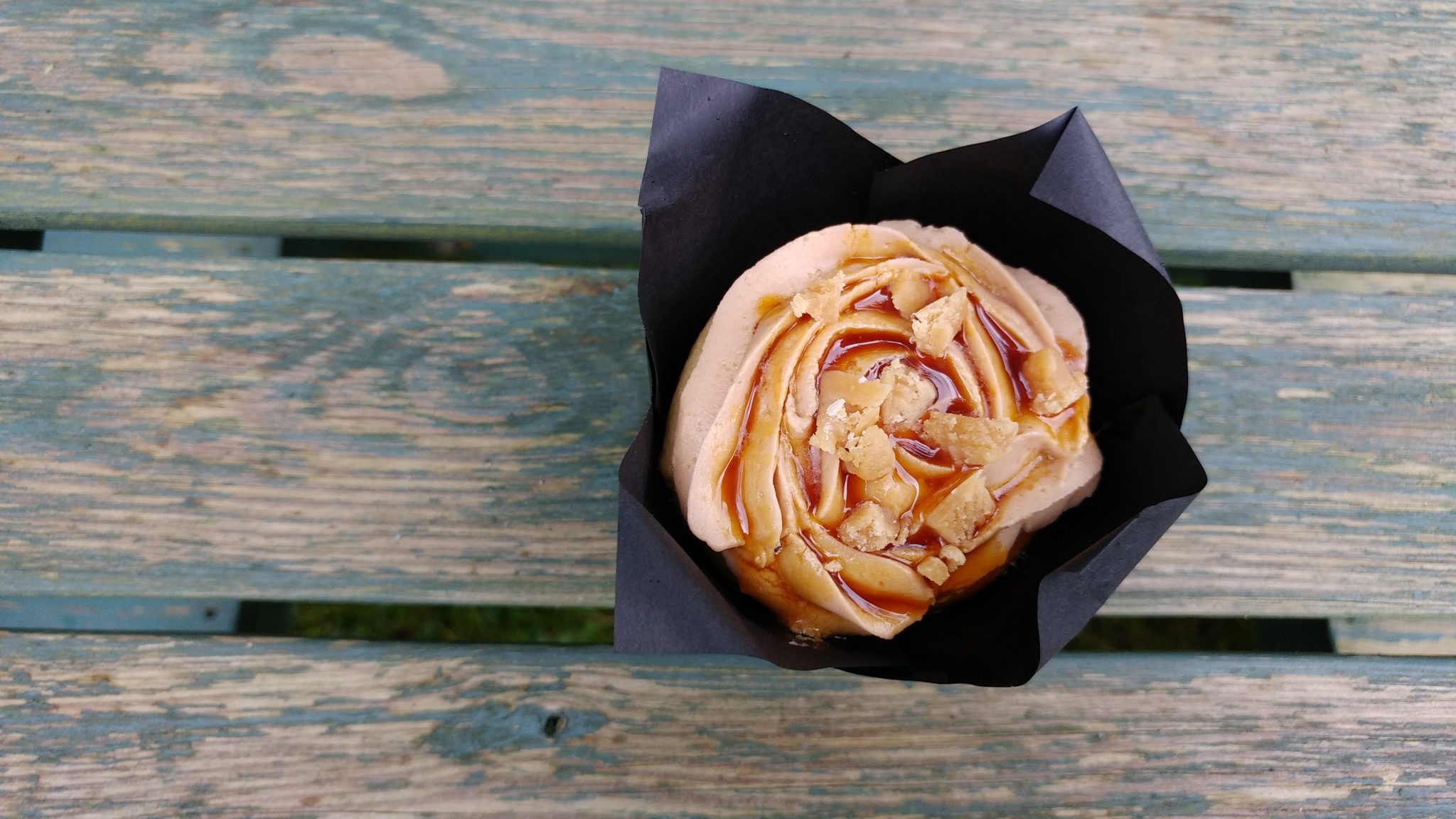 The fudge muffin was topped with fudge flavoured buttercream, salted caramel sauce, fudge and sea salt. Frosting was spot on. I’m a huge fan of salted caramel (I always have a tub in the fridge, so I can slather over cake / ice-cream / waffle should the need arise), and this was delicious. The sponge itself was a teeny bit  dense, but I think this may have been because it had been in the fridge overnight. Next time, I’ll leave it out circa 40 minutes before I eat it. I found this muffin went the best with Colombian French Roast. The sea salt from the muffin complemented the chocolate aroma from the coffee, making the fudge taste fudgier and giving it more depth. 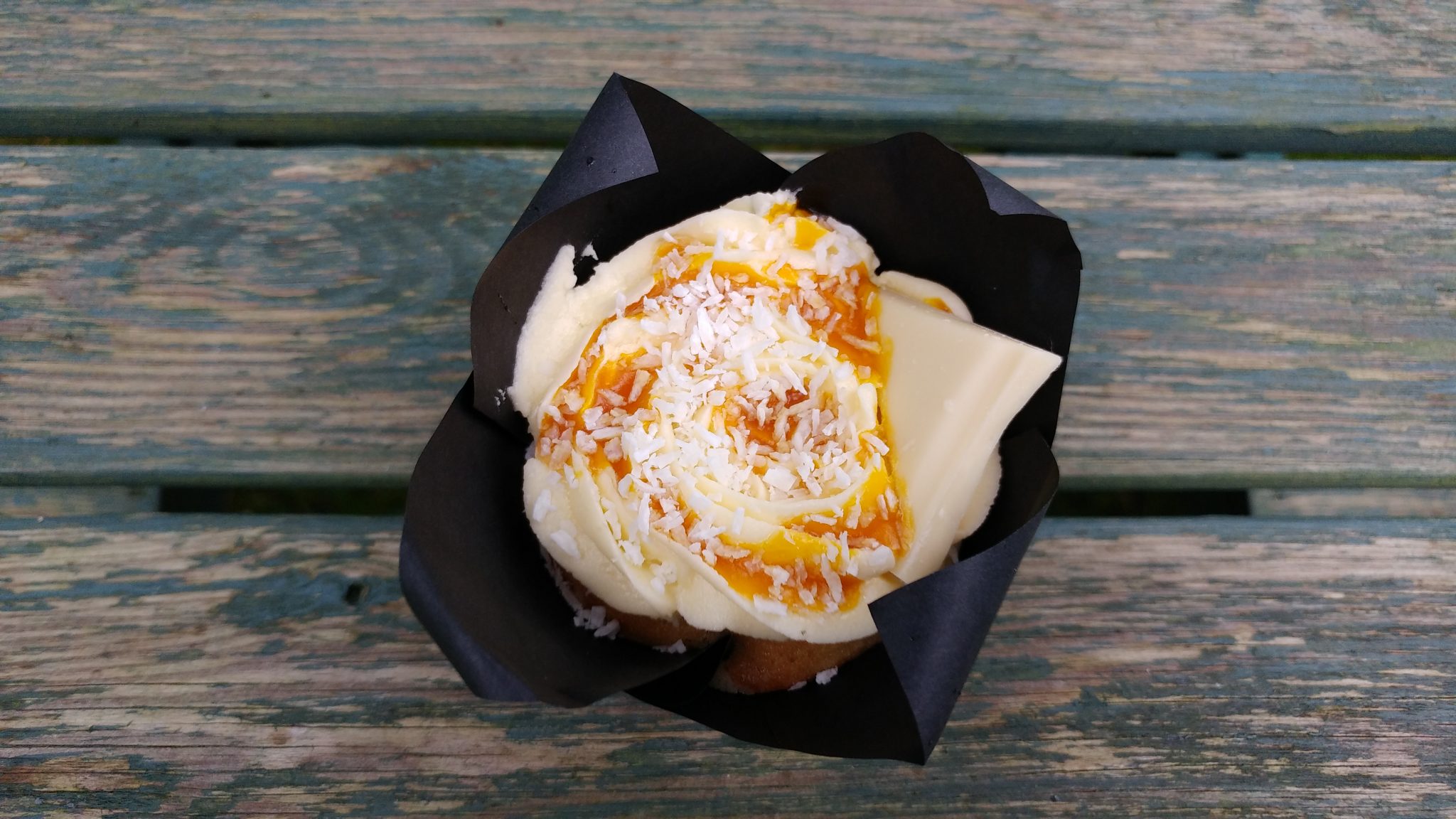 Cococabana was a white chocolate and coconut muffin with a deliciously gooey pineapple centre. Topped with vanilla buttercream, mango drizzle, coconut and white chocolate, this was another hot favourite. The sponge was wonderfully light, and combined with the coconut, made it feel sweeter and positively tropical. This is a muffin to be eaten when suffering holiday blues or even eaten on a beach. My coffee pairing for this muffin would be the Ethopian Cheffe Jeneta, as the citrus in the coffee lifts the coconut and tempers the sweetness.

Candy Shop was a strawberry muffin with a sticky strawberry centre topped with candyfloss buttercream, gummy bears, cola bottles and sour cherries. Sponge light as air was a delight to eat, whilst the frosting and candy topping sent me down memory lane back to my school days. The coffee pairing that went the best with this was the Tanzanian Ngorongoro Blue. The mild roast complemented this particular muffin, as with the numerous candy flavours, I needed a soft canvas that worked quietly in the background, so as not to overpower the dominant candy flavours (I found eating the sour cherries at the very end the best option, which also acted as a form of palette cleanser).

A girlfriend ate the Cococabana muffin without realising it was vegan, and herein lies a key facet; to make vegan food as good as non-vegan food, so there is no compromise on taste.

Here’s my challenge to you. I dare you to try Filthy Rich Vegan and see if you can tell the difference. Check out Filthy Rich Vegan’s Instagram for more information and luscious photos. (Caveat – I won’t be held responsible for you getting hungry as you ogle the muffin photos – you have been warned.)

*Source courtesy of The Telegraph*