We’re already in the first week of January, which is why I’m wondering how you’re getting on with your New Year’s resolutions. One of the most popular resolutions according to a recent YouGov poll is to eat better.

This means you will have to cook dishes from scratch. Over the past few years, I have fallen in love with food and cook around 70% of what I eat (the other 30% is spent eating out when reviewing).

I now balk at buying pasta sauce jars – it’s so much easier and tastier cooking the deliciously fragrant sauce at home, and you can control the amount of salt and sugar that goes into it. Plus, you can customise the dish however you want. For example, I adore garlic (yes I’d be a vampire’s worst nightmare), so I tend to go garlic-heavy by adding in a few extra microplaned cloves to the recipe. I’ll write a standalone post of a really quick and simple pasta sauce recipe in a standalone post, so do keep your eyes peeled for it. 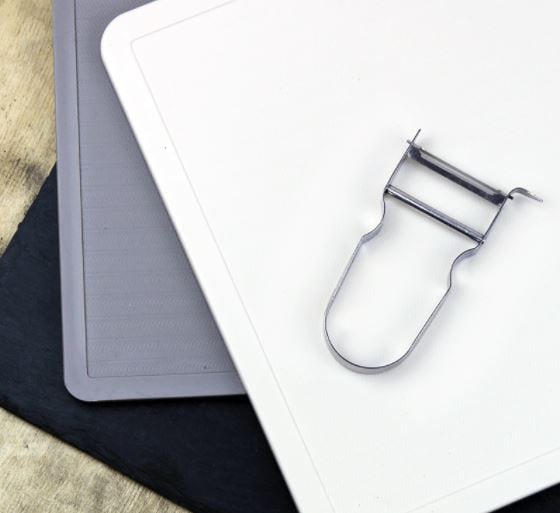 Don’t be fooled by its unassuming appearance. It may look like a normal vegetable peeler, but my god it’s as sharp as a razor and cuts through the toughest of vegetable skins as if gliding through butter. Peeling root vegetables like celeriac can be daunting, I know when I first started cooking, I steered clear of ‘difficult’ ingredients, because I was afraid of the prepatory work.

For my apple and celeriac soup, I peeled a celeriac (generally a knotted vegetable) with ease. I also peeled ‘easy’ vegetables like celery and asparagus to avoid the stringy, woody bits. I found that less skin was removed, as I applied less wrist pressure when swiping the peeler over the skin.

Just to reiterate, that this isn’t a sponsored post. I just happened to be in the right place at the right time (The Bolton Market Place, week before Christmas if you’re asking), where the lovely Anthony Walsh gave me the vegetable peeler during one of his other demos. I think he was in a good mood, it being Christmas and all. I just had to hop on and write about this peeler because it’s just so darn great.

Here’s the TT Trading Ltd website, do take a look, and good luck with the rest of your new year’s resolutions.